XMAS CARD WITH A DIFFERENCE

I planned to make my Christmas cards and stocking fillers before our long holiday which began at the end of August and I actually achieved my goal. The idea was to be 'in control' at the end of the year so as not be in a rush like 2012. Also, we are going away again for Christmas and the New Year so I need to be sorted for that too. So far so good except it's December on Sunday and I've not started my present shopping yet!!!!! arghh! the best laid plans eh? My lovely hairdresser, Erica, keeps the cards I make her and proudly displays them in the salon each year, so I decided to make her something very different this time. It started in the sunshine around July like this: 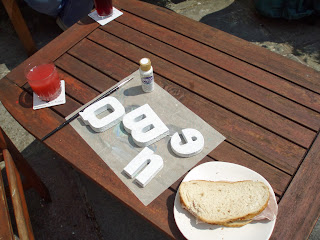 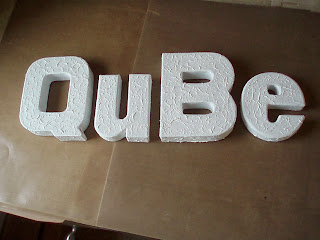 then it was all out on the embellishing: front 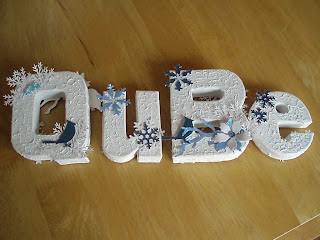 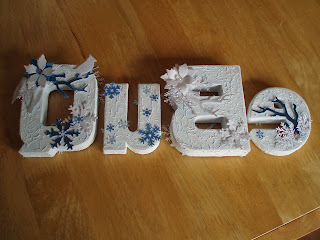 I bought some balsa wood when were in Worthing from a model shop which is slightly wider than the letters and after painting it white stuck them to it using a crystal bead to help steady the letter 'Q'. I've just taken it to the salon and it now takes centre place in the window. It's nice to bring a smile to someone who perhaps is having a rough time of things, I know it always helps me, so I hope some of my other pals will enjoy their little stocking fillers this year: This is one that did just that: 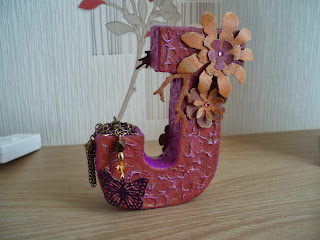 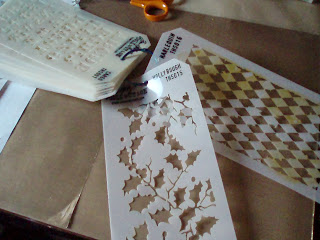 I couldn't wait to play but was out most of the day so when I saw that Tim had made a card on Thursday using his 2 new stencils, I was more than happy to have a go too. I tried to make the same background 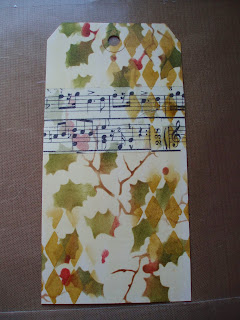 which turned out just fine. I then die cut a holly wreath and bow and covered them with distress glitter. After a good old rummage in my metal embellishment box, I found the muse token and hung that to the bottom of the card with some string. I then cut some red and green card to size and stuck the finished tag to it all. 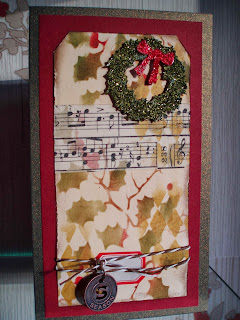 Its a lovely crispy morning and at long last Mr & Mrs Blackie have returned. I'm happy and content now!!
Posted by Joanne at 09:56 1 comment: Links to this post

I've finally managed to finish off both reindeers. The little one was going to be all white and covered in snowflakes so I began by painting it with Snow (Titanium) White Americana acrylic paint by Decoart. This paint is so creamy and easy to use and not too expensive either. However, the white theme wasn't going to work too well so I mixed some Distress Paint with some Studio Dash of Red acrylic and came up with a gorgeous shiny luscious colour which I used on both sides of the reindeer. A rummage through a flower embellishment drawer came up with a few Poinsettias, some leaves, a bit of gold elastic and a golden bell. Here is the result: 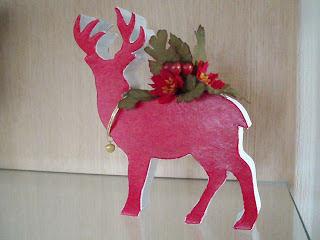 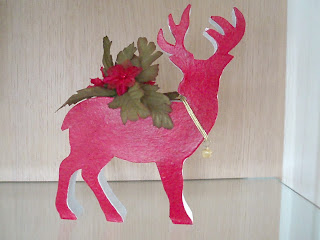 Here they both are: 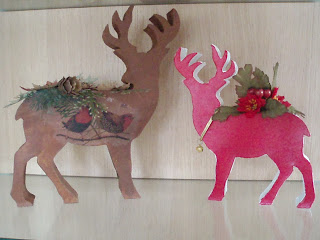 A big thank you to Hels for picking my name out last Xmas for the giveaway of the Paper Reindeers. I've certainly had fun altering them.
Posted by Joanne at 11:35 3 comments: Links to this post

I WAXED MY REINDEER TODAY!!!!!

It was a little late to decorate my 2 reindeers, which I won around last Xmas, for 2012 so I have started to decorate them today. Actually, I took them on holiday with me in August/September and primed them ready. The large one took first place and - as mentioned above hehe! - I decided to wax it. I bought some lovely Xmas napkins which have birds, a tree and some juniper branches on and after de-laminating one, tore it up around the images. I painted the reindeer with a combination of 3 DecoArt acrylic paints and then began to wax on the napkins. A few die cut Poinsettias, juniper branches and a pine cone cut from card plus some holly leaves cut from alcohol - inked scrap acetate made the decoration. It seems to have worked ok, what do you think?? 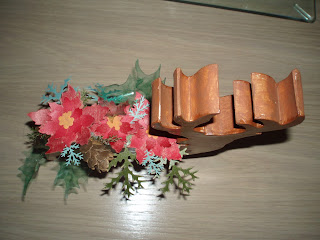 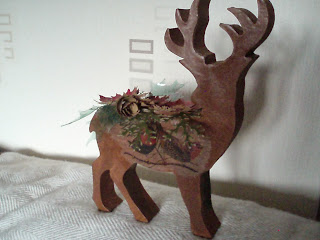 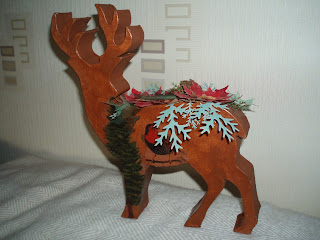 I've partly painted the smaller reindeer and hope to continue with it's decoration tomorrow.
Posted by Joanne at 16:07 1 comment: Links to this post

Bill is a neighbour and keen gardener.
I made this card for him following inspiration gained on an online class. 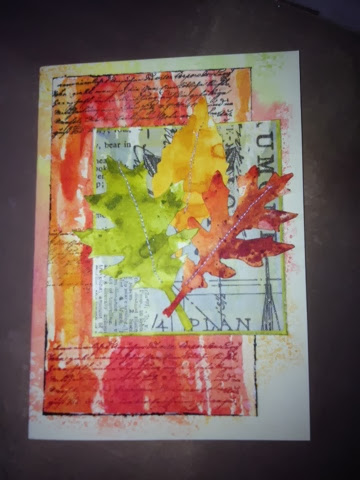 Are you all safe and sound after the fireworks last night? It was a 'soggy' one in my part of the country. For those of you who don't know what I mean, the 5th of November is Bonfire Night in the UK when we break the majority of any health and safety rules by allowing the public to play with gunpowder in their own gardens and gather as many children around bonfires as is possible. Can you guess I am not a fan. Sorry about that Julia but after reading about a rocket that went through a kitchen window some years ago injuring the children who were watching and then setting fire to the house I hate the things. Rant over its back to what today stands for, showing off our work spaces to the world. 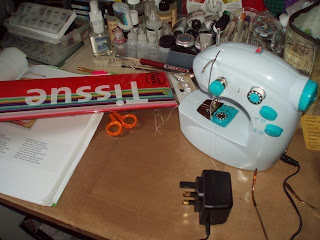 My little 274mph craft sewing machine takes centre place. I've been trying to sew some bits onto card for a birthday card I'm making - that was Monday. The thread broke and I just can't seem to get it back into the needle to have another go!!! Looks like I may have to get my big machine out after all!!! The tissue paper is to put inside some boxes I am decorating in the hopes of selling them. The folder beneath the tissue holds my Chemistry 102 information which I was referring to for one of the techniques I am using on the said birthday card. I've been missing for a while now which I knew would happen and is why I had to plan Xmas cards and stocking fillers so early in the year. Thank goodness I did that because the days are flying by once more. Its just over 6 weeks until we are away again and then only 3 weeks at home before another jaunt. I hope to link properly today and maybe get round to yours for a change as I'm using my computer rather than my phone. Still have to learn how to link properly on that. Have a wonderful WOYWW and keep warm.
Posted by Joanne at 09:13 5 comments: Links to this post

Another fun technique from Tim this month. I did this one on creative chemistry 102 and had fun with it then too. However, I don't have the sizzlet and stamp set, infact, I doubt they are in the UK but can't wait to see them and maybe acquire one or two!!! So for this tag I've used the Xmas Tree from the Blueprint CMS 135 collection. I know it's not time for Xmas trees but if you had seen my big trees covered in frost this morning you would have thought it was Xmas. Here is my tag: 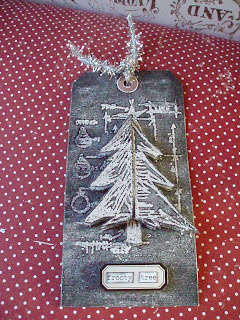 Right, I'm off to wash the chalk from my hands now.
Posted by Joanne at 09:46 7 comments: Links to this post

I made some UTEE flowers this morning using 3 amazing moulds I bought last weekend. The technique I used was one of the 15 Hels taught us at the workshop, it's one I need to practice more because despite using a heat tool to disperse bubbles I seem to have gained lots more during the pouring.
Anyway I made a little wall plaque with them as part of the decoration and although simple it is reasonably effective. 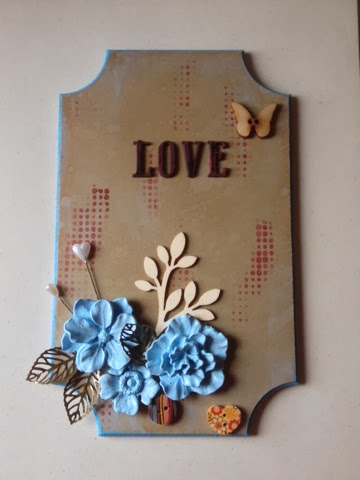 Hope the glue dries or I shall have to heat my glue gun up!!
Posted by Joanne at 14:53 1 comment: Links to this post

I'm joining in again this year

I've enrolled for this

I took part, completed the lessons and had a BALL

I hope to join in